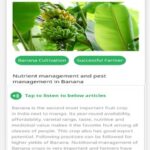 In recent years, researchers have reported alarming decreases in both the population numbers and the diversity of insects. These phenomena are often linked to the impacts of global climate change and habitat loss due to industrial agriculture. According to a study published today (April 21) in Nature, climate change and agriculture seem to have a synergistic effect on insect biodiversity, with each magnifying the declines caused by the other.

For the study, researchers from University College London (UCL) analyzed data from more than 750,000 samples of nearly 18,000 insect species that were collected from 6,000 sites around the world over the last 20 years. They compared changes over time in the samples’ reported numbers on insect populations and biodiversity to the average and maximum temperatures as well as land use at each site. Each area was categorized as having primary vegetation or low- or high-intensity agriculture. The researchers found that rising temperatures are linked to greater population reductions and the loss of more species in areas where natural habitats were cleared to make room for agriculture than in undeveloped regions. Areas with temperature increases but undisturbed insect habitats, or disturbed habitats but relatively steady temperatures, experienced smaller losses. In high-intensity agriculture areas affected by rising temperatures one standard deviation above baseline fluctuations, such as some sites in Brazil, the number of insects dropped by up to 49 percent, and the number of species present dropped by 27 percent.

“In this case, the habitat loss and climate change can often be worse than if they were acting on their own, as one can make the impact of the other worse and vice versa,” study author and UCL ecologist Charlotte Outhwaite tells the Associated Press. “We’re missing part of the picture if we are only looking at these things individually.” Part of the problem, Outhwaite explains, is that agricultural development reduces tree cover, making rising temperatures even deadlier for insects that are unable to find shade. Those that survive may then migrate to a new area that’s not as well suited to them.
See “Winter Bee Declines Greatest in 13 Years: Survey”

The sheer scale of the study and the number of samples included make the results particularly credible, University of Connecticut entomologist David Wagner, who wasn’t involved in the work, tells the AP.

“Our findings highlight the urgency of actions to preserve natural habitats, slow the expansion of high-intensity agriculture, and cut emissions to mitigate climate change,” Outhwaite tells BBC News.
See “Q&A: Global Insect Declines Due to ‘Death by a Thousand Cuts’”